Today, I need a holiday from being me.

You ever feel like that? I love being me but sometimes it’s hard. To add context, it takes a lot to get me feeling that way but it happens. We’ve had some worry over Ferb who needed a scan and meds which gave us a lot of worry (but he’s getting back to feeling Ferbtastic;) We’ve been dealing with my health issues, which are a pain in Ferb’s furry butt: tests, waiting for results, doctors, more tests, more waiting… more tests… (you get the idea) and now the pressure of waiting for a consultant’s thoughts on results and the small matter of an operation up in London next Friday (the day before my birthday) that, because of where the doctor works, is a massive financial hit… oh and we had to take a wild furry to the vet yesterday because he was seriously ill and he didn’t make it.

When I talked to you about some of the things I use to help me, I didn’t mention something I use that Renee in The Above & Beyond series also uses… existentialism. Right now, I can’t do anything to better my situation. Em is trying to figure out why I’m so quiet and it gets her worried but it’s one of the most powerful tools I have.

I’m not me today. I’m a different form of me. My mentee got me back into watching women’s football and Em, Ferb and I headed to see the Welsh women playing yesterday evening and, naturally, I’ve become a footballer.

Picture it: We’re in Florida, Orlando to be exact (because that’s my buddy’s home team) and somehow Tom, the coach, has gone on an unexpected trip to Wales where he’s so happened to stumble across me playing in the park—because I’ve lost all my physical issues and am super fit with abs and a tan and long flowing locks. Yeah. Tom needed someone to step in. Orlando have a crunch game against the champions and they’re missing a central defensive midfielder.

Now, the league think he’s crazy. In fact the whole of football thinks he’s lost it and has turned out in Orlando Pride’s stadium to see this match.

Because it’s my mental holiday, Orlando Pride’s team looks a little different, and so does Portland’s. The Orlando keeper is naturally Ashlyn Harris—because she’s the best, the captain and it’s not Pride without her. In the defence I’ve got Antonela Radeljić on the left who is the Bosnian number three we saw playing Wales yesterday and met afterwards. 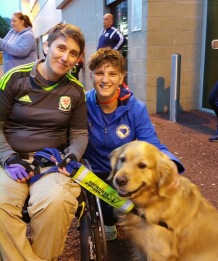 Antonela Radeljić has bonded with Ferb…

She was amazing on the field and even cooler off it. The Welsh skipper, Sophie Ingle is next to her wondering why she’s playing when she needs to be preparing to play a very important match for Wales on Tuesday. Next to her is Van Wyk whose been abducted from Houston Dash and Ali Krieger because you can’t have any other right back. 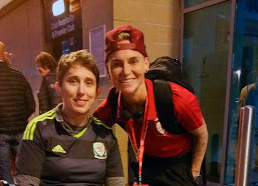 Jess Fishlock was hobbling but happy.

Not a bad bunch of ladies, let me tell you, even if Ashlyn Harris keeps yelling at me in training because it’s Florida, warm, humid and I’m Welsh. I got to acclimatise, Ash, give me a break. Captains, huh, what can you do with them?

So it’s eighty seven minutes. Portland are having a great time and are up 3 – 0, the stadium is packed with Portland fans filling all one side with drums and flares. We have a corner but the Orlando fans are quiet and peer between their fingers as Tom makes the sub… and me, at my youthful age, get my studs checked (cleats to y’all cross pond) and on I go. 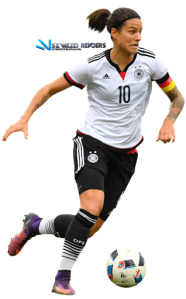 Maro was on the ball

Marta swings it in but the keeper punches it out… to me… may as well hit it, right? Yup, perfect connection, swooping, swerving… and straight into the top right hand corner.

The fans stare at each other. Right. Not a bad first touch.

Restart, and Marozsán makes a interception and passes to Fishlock who takes on three players and threads it through to Kerr who is more than happy to chip the keeper. (I can’t do everything myself or it wouldn’t be realistic.) The Orlando fans look to one another… yeah, 3 – 2. Tom winks at me. We can do this… but it’s 89 mins. We restart, the ref checks his watch. So I hit it (Carli Lloyd style) and Krieger pokes me in the arm, yelling at me for wasting the ball (she heckles) only for Ingle to turn us both and point at the ball. It’s over the keeper… and in. 3 – 3.

Van Wyk made some amazing interceptions!

Orlando are on their feet, Krieger is trying to squeeze my ribcage and Marta is muttering at me because my shirt is soaking and I’m icky to hug. (what do they want from me? I’m a Brit. Our sunshine is not this warm.)

The ref decides there’s three minutes of extra time, the Orlando fans are waving flags and singing, and Ferb is barking support from an air conditioned pool in the technical area (my boy has got to be there.)

Sam Kerr scored with a neat chip over the keeper…

Portland come at us, Radeljić makes a heroic last ditch tackle; Harris saves three incredible shots, Marta dribbles us up the field, Rapinoe has a world class attempt on goal saved, Marozsán too… Krieger, Van Wyk, and Ingle make heroic interceptions and Harris yells at me to stop sweating all over the place and do something useful.

Right then. No pressure. I get the ball outside our penalty box and off I go into a run. I’ve somehow picked up the technical ability of Marta, the speed of Kerr and added in some Welsh magic… around one, around the other, and suddenly I’m through on goal with only the keeper. Smack. Uh oh. Keeper takes me, the ball and Fishlock who was backing me up… I look to the ref… she checks her watch again… then points to the spot: Penalty. 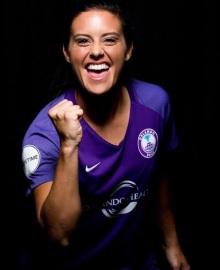 Ali Krieger is pleased I managed to do something useful…

Now Tom has brought in the rule that whoever earns the penalty, takes it. So Ingle takes me to one side and tells me I can do it and I need to take a shower. I tell her she’s Welsh too so if I’m sweating, she is. It’s not ladylike.

Kerr throws me the ball and Rapinoe cheers me on and Van Wyk gives me the nod. Radeljić tells me that if I get it in, we’ll go check out Disneyland and the Orlando fans again peer between their fingertips.

Heartbeat moment. Thumping away in my ears….

Everything is silent. Hope Solo has suddenly become the Portland keeper and is dancing around, daring me to beat her. I put the ball on the spot. Do the impossible. Ref blows and I smack it… Solo dives… it slices past her outstretched hand into the net. 4 – 3 Orlando.

The ref blows for full-time. 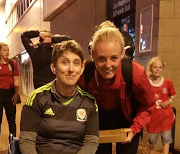 The crowd go crazy, Ferb is barking, Em is muttering that it’s so hot and why I couldn’t have picked a team somewhere she didn’t need to wear sunblock all over her.

Marta made some slick passes

The team are squishing me, but I run over to the stands, to this one kid sitting in a chair looking up at me hoping I’ll notice. Off comes the shirt, the soaked shirt that miraculously dries out by the time it gets to him and fits him. He grins at the t-shirt I have on underneath (again, I’m British, you never know when you might get chilly) and on it are three simple words in a hashtag #NeverGiveUp.

Guess my heart is talking to me.

There’s many problems closing me in, a lot of hostile keepers trying to stop me, a lot of pressure, a lot of stress, a lot of pain and heartache and they feel like gigantic thick walls blocking the sunlight, but hope burns brightly inside and I’m going to take my faith and smash every single one.

And in the settling dust, my face appears and I’m smiling once more, because I can.

One thought on “Game On”