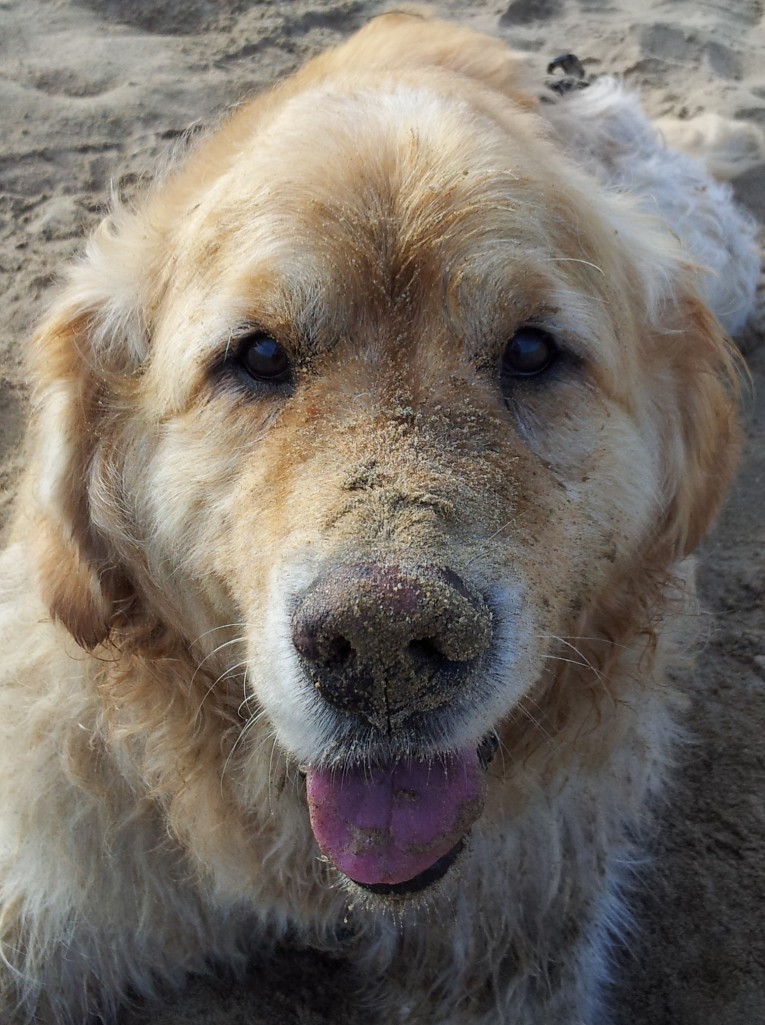 Today’s blog isn’t going to be easy for me to write in some ways but I’ve been dreaming about it which generally means ‘get off your bottom and write.’

You see, last Friday (which was Friday 13th if you’re the sort who likes facts,) I lost an essential fluffy member of my pack. Most people who saw pictures of him may not realise that Ollie had a story and it’s the least I can do to tell it.

It starts back in 2010 when I met him but in the tradition of storytelling, you need to know the context and background, right? Right. It’s no secret that I suffer from a long-term sickness thing. Without boring you with details, people who suffer from chronic conditions can find it a bit of a battle to get out of bed and do the normal things everyone takes for granted. It also means that the days can get a little bit lonely while the rest of the world works for a living!

I kept getting dreams that drove me crackers until I clicked onto the web and found myself looking at Dogs’ Trust. There were dogs with pictures and dogs without, it listed if they were housetrained and any behavioural issues that they may have. (It’s a great site, you can see for yourself: )Then I was in the re-homing centre. ‘Just looking,’ I told myself as we chatted to the folks in the centre. The lady we saw said to us, ‘We have a older dog called Ollie who was ten. You being at home sounds great for him as he’s got separation anxiety.’

Now, Ollie was a hit in Dogs’ Trust, he had lots of families and people interested in him. We sat on the bench because a family had just taken him out and around the corner came this huge, muddy drooling furball. I mean, Ollie may not look tall in pictures but he was huge. He was 38kg – 83lbs worth of retriever. He was as tall as he was wide and by chocolate, the drool. For someone who had never had an animal bigger than a gerbil, seeing that amount of slobber coming your way was a little disconcerting!

He absolutely loved Em, the moment they laid eyes on each other it was adoration both ways. He trundled on over to me and sat next to my legs. He never met my eyes, drooled all over my trousers and left a load of mud over my trainers. ‘What do you think?’ they asked. Em was ready to sign then and there. ‘Let’s think about it.’ Was my reply.

A week later we took my sister’s dog Fern with us to meet him. They had a wonderful time, a bit confused why they were on a walk together but comfortable. Again, he never met my eyes. I was worried about that, animals are normally drawn to me whether I like it or not. What did that mean?

Before we took my Mum up (because she was the final tick in the box) I read everything I could about dogs especially Goldies. They were loving dogs, not too much attitude but you’d be covered in hair and may lose a few socks. Somehow, during my panicked learning spree, Dog’s Trust had come and checked over the house to make sure it was suitable and we’d taken my Mum to meet him, (Love at first wag.) Still, I was terrified of being left day after day with a huge lion.

January 13th rolled around and we were sat listening to the amazing behaviourist who talked us all through the dreaded first night. Other people had puppies so there was talk of pee and other bodily functions there was talk of crying through the night and socialisation with the dogs already living in the house. Then, with cousin Fern keeping me sane, Ollie trotted in straight to his best buddy Em. He looked cleaner but like he’d been backcombed. (He had his winter coat on, I later realised.) That’s when I realised, I now had the job of giving him a home. You see, I made the promise to him in that moment that I would never give him away. He was staying for good, that was our job and the least he deserved.

First stop… the beach. If I’d had doubts before, seeing his sheer delight as he lolloped and bunny hopped his way down to the sea helped ease them. Wow, to see his heart lift like that, to see him play, pounce, roll and sniff the salt air, it was magical.

He thought we were going to take him back then and he was polite to the point of British reserve during the first few weeks. He did as he was told, kept his head down and when Fern returned home from her duties, he accompanied us on walks in a subdued manner. He never once looked at us.

We took him to dog training classes up in Dogs Trust which was my way of saying that he had no reason to worry about being taken back anymore. A way to condition him that we may take him there but home was with us now. I’d catch him looking at Em when she wasn’t paying attention in those classes. He was awesome too, he learned every skill they threw at him with arthritis and me being a numpty trying to teach him. I got him to heel and ‘close,’ he drooled on me and panted. The assault course in the summer was funny. We’d throw the cheese in the tunnel, he’d walk in and pick it out. Em would throw it in further, he would stare at it and look at her as if to say, ‘Why did you do that, go get it!’ 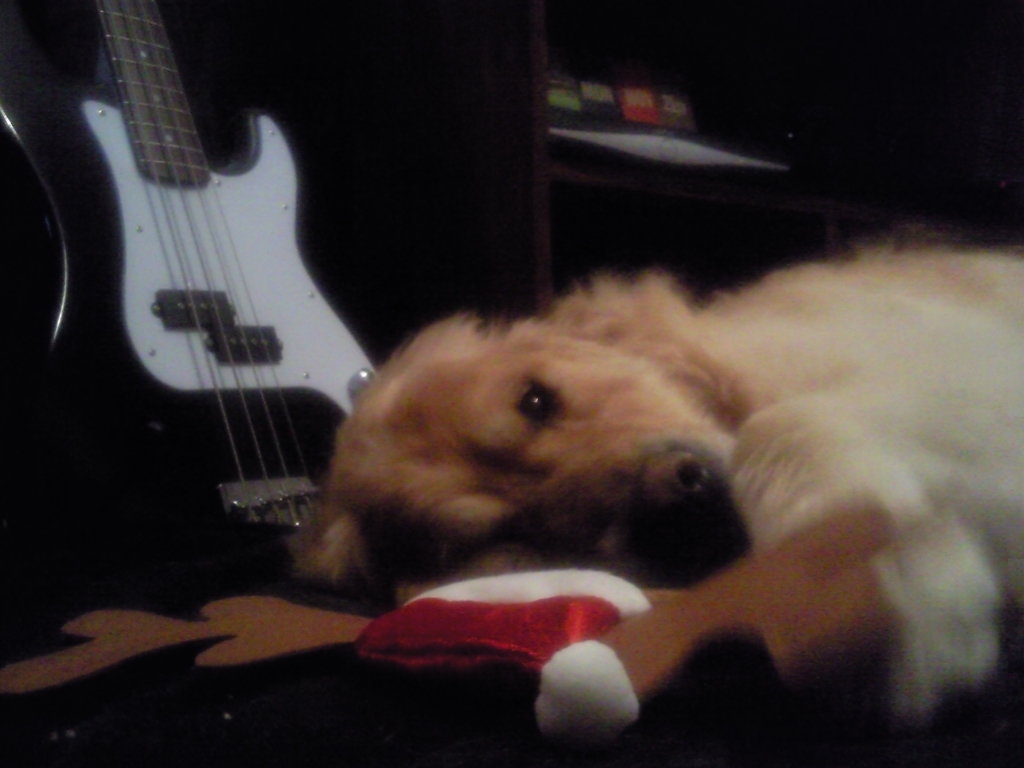 Then there was home life, his puffing next to my bed. ‘Hey you, the other furless pup has left again. I want food, get up already!’ And ‘It’s pouring down, if I’m going out to pee, you’re coming with me.’

There was Grandma and Grampy days too. His tail actually did a windmill motion as he bunny-hopped down to see them, his ears straining to listen for the treat tin. All while we attempted to get him down to a weight that was expected of a goldie.

About two years after he first arrived, I’d started to have trouble with my arm and was in bed more. He seemed to realise at that point that what I had promised was true. I woke up and looked into a pair of misty brown eyes. I was not furless pup, instead I was Mummy. ‘Mummy, you need to get up now we both need to eat.’ He’d start to bark at odd times when no one was at the door which we realised was him telling me I needed to eat or drink, I needed to sit down. He could tell that I wasn’t going to feel too good. He started to usher me on walks to seats if he sensed I was tired or drive us onwards to get home.

He started to lick my feet, my hands and sniff at my face, resting himself against my legs or lying his head on my feet. I would sing to him changing the song ‘Lollipop’ to Olliepop which earned me a huff and a lolling tongue. His eyes changed, he became more alert yet more relaxed, more playful yet more calm and always, always loyal. As one of the ladies up in Dogs Trust once said, ‘Ollie loved to be adored.’ He did, he loved being cuddled and played with yet never expected it.

Last year, we took him with us to York with us during the Festival of Writing. Seven hours each way in a hired VW transporter, he loved every second. The ducks, the lake, the grass the fact he was with us. We took him to Devon and he was the same, he escorted Em to get the water and bread in the morning and attempted to fit in the tiny space between the front of the caravan seats.

At Christmas, he started to feel unwell and the months up until his passing weren’t a lot of fun. Still, he managed to fling his bone in the air, yell at the wonderful vet who took care of him during his time with us. He managed to swallow a Rawhide bone and see the sea.

Ollie was awesome in more ways than I could ever hope to express in words. I mean the ball of fluff or Olliepop Moufasa as I ended up dubbing him, was so full of personality when he finally came out to play. It took us such a long time yet it was worth it. There were downs: an older dog with bladder and poop issues, with bad arthritis and nerve problems will always have grumpy days where he yells at you. All that said, it didn’t make a darn bit of difference to us, he was ours and he quite clearly marked us as his. (With drool… seriously, Beethoven was nothing on him…)

Lots of people often congratulate us because we took on an older pup but I will happily say that they are worth it. Yes, you don’t get fifteen years with them. Yes, you spend a lot of time getting to know your vet but they are worth it. Dogs Trust will help with existing conditions and if you have your buddy insured then it’s no different having any other dog. They are easier because they sleep more, they don’t really want to destroy things, they want some chilling time, some love, food and warmth. In return they fill your house with love.

Seeing Ollie learn to trust and love again, to see him come out of his shell and radiate happiness was incredible to witness but he gave me something more. Ollie got me up, he got me moving, he gave me company, cuddles and ordered me around. I guess you could say that we both helped each other learn to live again.

In honour of him, I would like to ask you to post pictures of your own pets. Celebrate them, young and old with the hashtag #OlliesOldies. If you are so inclined, I’d love if you could pop over to Dogs Trust and give them some of your hard-earned cash. Reason why I ask is because those folks never put a healthy dog down. They look after every one, they train them to help them readjust and they are incredible. https://www.dogstrust.org.uk/giving/donations/makeadonation/default.aspx#.U6A7fo5waUk

If you don’t want to do that but fancy buying something canine related, they have a shop that all funds their work and you get cool stuff! http://www.dogstrustgifts.com/

Bridgend Dogs Trust (Ollie’s pack) also have a wishlist on Amazon to make it easier http://www.amazon.co.uk/registry/wishlist/3BAOVE4EQEBJV

If you just want to leave them a message to say thanks for the work they did so you could enjoy Ollie’s adventures, they are on Facebook too: – https://www.facebook.com/DogsTrust  & Twitter: – https://twitter.com/DT_Bridgend

If you do pop by don’t forget to use the hashtag: #OlliesOldies

Thanks for reading, I hope you have a great day. Check out the little gallery at the bottom. As we go through the pictures, we’ll add more to it so you can check back anytime.

One thought on “Finding Home”