I was talking to a good friend the other night about writing and she was telling me how her character is driving her to learn new things. To me that was an experience I know all too well. For some authors and readers that may sound like we both need a visit to Serenity Hills but I think it’s a sign that you’ve found a character who has a story to tell. 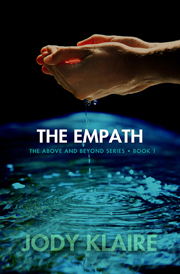 The Empath, like Aeron, is a little bit different.

If you’re learning to get your book from your mind and onto the page, there is an overwhelming amount of information out there. There are courses and editors, mentors and How To books written by bestselling authors to sometimes not exactly bestselling authors. There’s a million points of view on everything from… er… points of view to how to plot, the narrative distance you should use and what you should write. I’m not an expert by any means but from my experience it’s not so much a theory of one way is right and every other way is wrong but more what works for the writer. Like in all creative aspects there are ways, styles and techniques to recreate what is expected to fit into a genre. There is a way to write crime, romance, horror, thrillers, comedies etc. They have different things that you need to tick in order for it to be classed as such. A way to put you on the shelf.

That’s great if you do happen to find out that a book you’ve written does all the above but what if you don’t. What if your characters, your books, your stories take many of the bits you like and forge them into a… well… a different genre?

That was one of the big things with my writing. I don’t exactly write straight-down-the-line thrillers. The Empath for instance has at least three major genres: mystery, paranormal and romance. Why it ended up that way was simple, I followed Aeron. The Empath isn’t so much defined by what happens but by who it happens to. The Above & Beyond Series is about Aeron, her life, what happens to her. She’s a little bit different as is her story. I didn’t create the character to match the plot but instead the character determined what happened in the plot.

I’m pretty sure that somewhere an author is muttering ‘that doesn’t happen,’ to themselves but I think it just shows that a book is individual to the author that writes it. That’s what makes the world of books so much fun. Harry Potter told by anyone but JK Rowling wouldn’t have been the Harry Potter we know (and I love.)

Aeron and her series has had me studying and learning about America, about the hidden history that I was unaware of. I have enjoyed every second of learning about just how incredible your average US citizen is. The force of nature is always present in some respect, they live in a huge melting pot of cultures which can change within short distance to something completely different. They are a unique country that Aeron challenges me to discover. So, by being an author, I’ve learned more about the world around me and within.

Aeron is as fluid and vivid to me as a real person would be.

Most experts, agents, publishers would probably say that a book must fit a particular genre. They have to know where it goes to sell it. Traditionally, readers head for the section that contains their favourite genre. All that being said, JK Rowling had adults reading children’s fantasy and going to see the films. Most readers didn’t really care what genre Harry was, they wanted his story and his world. The character superseded everything else. If you think back to your favourite book, what was it that drew you? The story or the character? What stayed with you after you put the book down? Was it the plot or the person? (maybe both?)

As an author I had to look at that long and hard. I had to make that decision whether to try and squeeze my series into a box that didn’t quite fit or freedom,(cue Mel Gibson.) It meant taking the chance, it meant finding someone who wanted to take that leap with me. It meant understanding that I might not get to have a huge advertising campaign on TV, have supermarkets and online shops splashing my book in the face of the prospective reader. It meant more hard work, the increased possibility that everyone may hate it and maybe no red carpet with a feature-length film.  On the flip-side, I would have a book that was truly mine, that said what I felt was important. It would tell the story as I felt it inside and the characters would be very much alive because of that. I would be free to follow my own creativity, to follow my heart and play with stories the way I wanted to.

A review on Amazon

I’m glad I took that chance and I’m still deliriously excited that Bedazzled felt the same way. So far, it’s been pretty heart-warming to see that a lot of readers really like the crossing of genres. They think it’s different. (I think most of the time in a good way,) which makes me smile from ear to ear. And, maybe one day, I might watch a 6’5″ Samson-like-actress strut down the red carpet. It would be different, that’s for certain. Until then I’ll keep writing and keep dreaming in hope because:

“All things are possible…”

You just have to believe!

One thought on “Talking Heads”