Today’s blog precedes my Inky Inspiration post so I hope that you enjoy the double whammy coming your way! On the writing side of things, I started to write the third in Aeron’s Series and am really excited to be back with her and spending some time with her and the CIG cast.

On a personal note, this week the little fluffball had many firsts. He was all ready to face the outside world last Wednesday, so he had his first sniffs around his territory. He also had his first sleepover with cousin Fern, who came to show him the ropes. She has more patience than me that’s for certain and he absolutely loves her, (not quite sure it’s mutual yet.) They went to the beach and he ran into the sea, looked down at his paws and ran back out again. He doesn’t do wet and cold! It was really fun to watch him experience it all for the first time and for a pup, he’s always happy to come running back when called.

Saturday brought a big smile to my face which is what I’m going to spend most of the blog on today. As you probably know if you follow the blog, I write about women who happen to be heroic, strong individuals who I hope inspire anyone who reads about them. What is even better is when I get to meet and talk to a real life hero.

I shared the same school year as one of the greatest athletes in sport. Nicole Cooke is the only rider ever to be world champion and win Olympic gold in the same year, that’s without the Commonwealth gold, the ten British national road race titles, 70 professional titles in Europe, North America and Australia (twice winning the UCI Road World Cup 2003, 2006) the Giro d’Italia and two times a winner in the Tour De France (2006, 2007.) She has a MBE for her services to cycling. She is the kind of champion that Martina Navratilova and Billie Jean King are in Tennis, a woman who’s drive has paved the way for all the success that has followed in her bike dust. As someone who quite often saw her name up on the record boards in school, I sat watching my TV set (yelling) as she tore up the final few metres to win Olympic Gold. She’s the epitome of what can be done when you put your heart and soul into something, when you ignore the barriers, those who try to mould you into something you aren’t and believe. 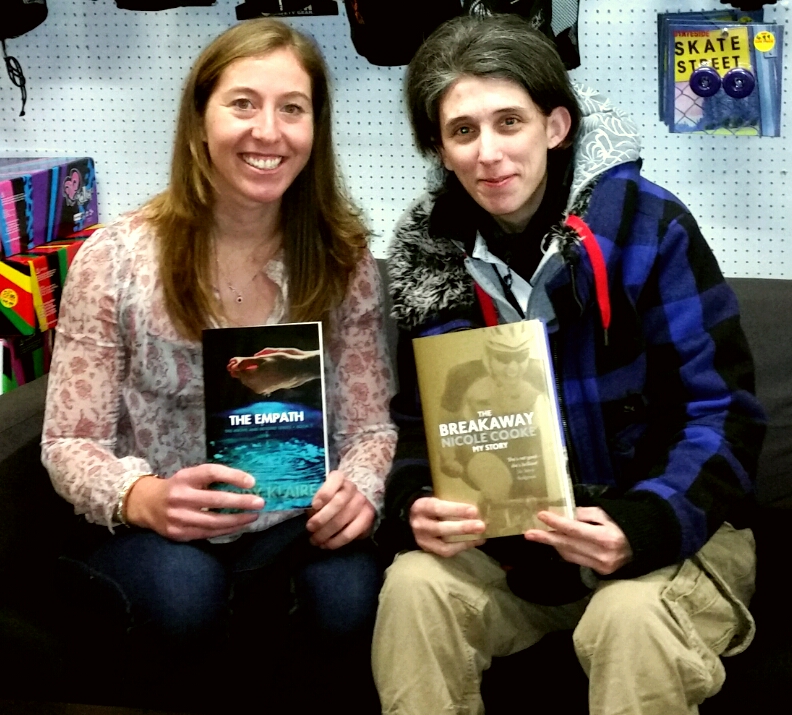 Yay, The Breakaway is an awesome book! (and we even got Aeron in there too.)

I went to see Nicole at her book signing and after reading it, I made the decision that I’d really like to explain to you why it’s a book you will love. I’m no reviewer and this is a bit of a one-off but I think you may understand when you read on just why I wanted to share it with you.

The Breakaway has a host of athletes and reviews telling you how good it is but if you haven’t spotted it, I’ll fill you in.

First, I will happily tell you that my cycling knowledge extends to these things: actually cycling and staying on (sometimes,) that lots of them wear Lyrca and have light frames for aerodynamic purposes, that the winner of the Tour De France wears a yellow jersey and that cycling up the hills around where I live is hard.

The great thing about The Breakaway is that you don’t have to be an expert. It’s Nicole talking to you through the page and you are instantly drawn by the kind of energy and drive that comes from a champion but with the added plus of her being a really nice, honest person. I really loved that her main love as a child was her family and sport. Her work ethic is truly incredible and her common sense and strength make it a pleasure to read. You don’t get bogged down at all which is really refreshing and the portrait she paints is one of complete dedication. One of my favourite little bits is a simple reference to the fact that there is a competition in Wales and one in Manchester that she is competing in simultaneously. It’s about two or more hours from one location to the other. Nicole wanted to do both so competed in one then her dad drove her (while she caught up on sleep) to the other… back and fore… (are you thinking what I’m thinking there? Wow? Yeah, me too.) Quite honestly, Nicole’s the kind of character I’d love to have in my books.

Getting to see her again was a reminder that some heroes really do know what the important things in life are. Honesty, hard work and being nice to people. It was quite a surreal moment to sit in a bike shop that once sold her punctures but a fitting one. It echoed the story in a sense. It inspired me. Nicole is inspiring and if you love heroes, especially ones that get back up and if you like heroes who can lift you, you’ll love this. Nicole is not just a trailblazer but someone who drove a monster truck through inequality and flattened any argument about her incredible talent and she did it with a grin on her face.

My Autobiography is due for release on 31 July.  Writing it has been another challenge as I have attempted to reflect my journey through cycling from the female perspective.  I have started it with a look at what inspired me, the growing women’s scene, moves towards equality, the chance to ride the great classics and great races, regardless of gender, the wonder of this most enchanting of sports.  Then I describe my own career, my successes and failures, my high moments, my injuries, operations and crashes. I also describe the polluting and cancerous effect of performance enhancing drugs.  I have also charted the reaction of the universally male management within cycling both at a British level and at UCI level, where not only were so many opportunities lost, but often things that worked well were neglected and ignored so that they would decay.  At many stages it was a very tough write,  this is no saccharine fairy story, it couldn’t be, a woman, in macho man territory, but I hope you like it.

Nicole on writing The Breakaway

What’s funny is that like most heroes, she is pretty sure that her achievements will be surpassed and forgotten. That’s just the mark of how humble she is. Although the media hasn’t given her the superstar status, Nicole doesn’t need it. History can never really forget her because that little girl from South Wales opened the door for every single woman who will succeed on a cycle. Her achievements will have planted seeds in other little girls around the world. Her courage will inspire other women (and men) that no matter the odds, anything is possible and… She even makes a poka-dot jersey look cool.

So, if you’re looking for a book that will light your imagination, fill your heart and get you growling at the terrible way some people are, Nicole’s book The Breakaway, is definitely one for you!

You can find Nicole here:

A retirement statement from a sports star rarely causes a flicker, but Nicole Cooke went out as she rode her bike: giving it her all. The contrast could not have been greater – as Lance Armstrong, a fraudster backed by many corporate sponsors and feted by presidents, was about to deliver a stage-managed confession to Oprah, so a young woman from a small village in Wales took aim. She too had been a cyclist, the only rider ever to have become World and Olympic champion in the same year, and the first British cyclist to have been ranked World No.1, but as a woman in a man’s sport, her exploits gained little recognition and brought no riches. She too had ridden through this dark period for the sport when drug-taking was everywhere. Nicole Cooke spoke up for those who had taken a very different path to Lance and his team-mates. In her frank and outspoken autobiography, Cooke reveals the real story behind British cycling’s rise to global dominance. With a child’s dreams of success, she left home at 18 to pursue her goals in Italy. Broken contracts, unpaid wages, a horrendous injury and drugs cheats were just some of the challenges she faced, even before she lined up to take on her opponents. The Breakaway is a book that will not only inspire all those who read it, but which also asks some serious questions about the way society regards women’s sport. (Click on the book cover if you’re in the UK and here if you are US and if you’re a kindle lover here)

I wrote this book in 2008 with the aim to pass on my passion for cycling to help newcomers and experienced cyclists alike to get the most of riding. Whether you are a social rider, tourist, commuter, sportivist or racer you will find info on what bike to buy and how to set it up. There’s also guidance on nutrition and training plans for both beginners and serious athletes.

One thought on “Touching Base”