It’s always great to chat to other authors about their work and current projects and I thought it would be nice to introduce my fellow Bedazzled Ink author Carole Wolf to you. 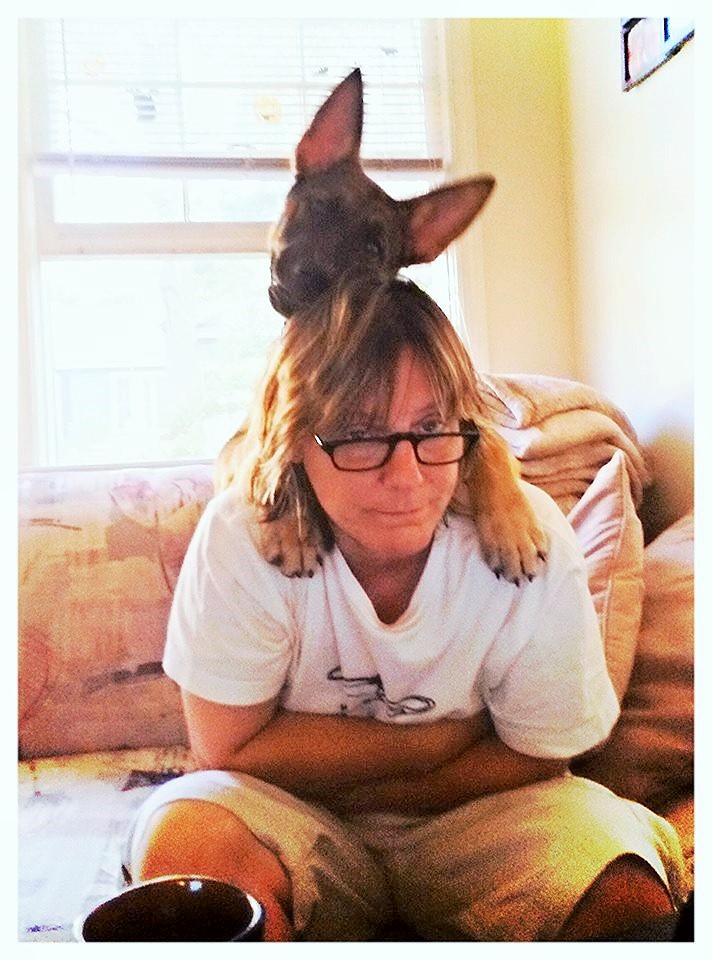 Carole Wolf is from Allentown, PA and currently lives in Columbus, GA with her partner Yoko Hirose. She has a B.A. in English Literature from Columbus State University, and she has been writing for twenty-five years. Her goal as an author is to write novels that address sensitive social issues, which not only affect lesbian women but all women, and she hopes this will help open up lesbian fiction to mainstream readers. Carole’s other passion is music; she is a music producer and has been playing the drums since she was eleven years old. She has played with three local bands and has produced music for several aspiring singers. She has two four-legged children—a a German Shepherd/Rottweiler mix named Caesar and a Tabby cat named Jewel. Carole is currently working on her certification to be a Drug and Alcohol Addiction Counsellor.

Hi Carole, thanks for dropping in to chat about Everything. First of all can you tell us a little bit about why you started writing?

I’ve been writing in some form or another since I was in grade school. I never finished anything, though. Not until I went to college and studied Literature and Creative Writing about ten years ago.

Was it always your goal to be an author?

Actually, no. I wanted to be a music producer, went out to Los Angeles to get famous and everything. I was looking to get into the Hip-Hop game in the early 90s. That didn’t pan out so well, so I came back to Georgia and went back to school for an English degree.

Do you think your BA in English literature has helped or hindered you in writing novels?

It has helped me beyond anything I could have imagined. I liked to write, but I didn’t know how to write. And I wasn’t going to learn how to write until I learned how to read. By that I mean learning all the elements of fiction and literary tricks and devices that the masters had perfected. Once I understood dramatic irony and what a signpost was or a red herring and so forth, all those things you learn in Lit classes, I had a much more solid grasp on my own writing.

Although Everything is your first novel with Bedazzled Ink, it certainly isn’t your first published work, right?

I self-published three other titles; however, I’ve taken them down to have another look at them. They were all written years ago, before I’d had much practice at being a novelist, so I believe I could improve upon those works now.

last year, I read the first chapter aloud to one of my best friends, and she demanded that I revisit it. She said it had a unique and instant hook and if I didn’t finish it, I was a blithering idiot. So, to avoid idiocy, I took it back up again.

What inspired you to write Everything, was there a particular event that brought the characters’ stories to you?

The story truly just jumped into my head (which is true for most of my story ideas). I started it back in 2009, actually, and it sputtered out—I lost my direction and it started to feel lame and crappy, so I set it aside after completing only two chapters. Then, last year, I read the first chapter aloud to one of my best friends, and she demanded that I revisit it. She said it had a unique and instant hook and if I didn’t finish it, I was a blithering idiot. So, to avoid idiocy, I took it back up again.

There is a lot of conflict in the book, love and loss, the pursuit of fame and of course a love of music. Did you take your own experiences in the music world and use them at all for Everything?

Oh yes. I’ve had some experience as a drummer in a local band, and I’ve got a couple dozen musician friends who’ve toured around and had stories to share as well. When living in LA, I’d gotten very close to signing a major record deal, which ultimately fell through, but the experience itself was something I was able to draw from for the book. It helped me keep all that stuff genuine and realistic.

Did you enjoy mixing your two passions?

I had a blast writing Everything. I’d throw on some old Jimi Hendrix or Grand Funk Railroad, turn up my headphones volume, pop open a bottle of wine, and sit at my laptop until the wee hours, lost in the characters’ world. I laughed my ass off in some scenes and cried a little in others. Hopefully, those emotions will translate to the readers as well, and they’ll have a great reading experience.

It’s not a short book either, right? Did you envision it being the size it was when you began?

No, I didn’t. In fact, by Chapter Nineteen my beta readers were asking, “So, how many more chapters do you think it’ll be?” That started to make me nervous, and I considered just winding it down, simply because it was getting a bit long. But then I had some other friends encourage me to just keep going, write it until it’s finished—tell your story until it’s told. Twenty-three chapters later, I had Everything.

I didn’t even realize that was happening until I was halfway through that respective chapter. The book wrote itself in many ways.

Did the story grow in ways that you had not expected?

Absolutely. I can’t give any spoilers, but there were definitely turns that I didn’t plan on. The twist in the end was unforeseen as well. I didn’t even realize that was happening until I was halfway through that respective chapter. The book wrote itself in many ways.

You talk about there being two parts of the novel, one a first person omniscient narrator. Did your BA in English literature inspire the way you set about depicting the story?i

Dividing the book into two parts was actually Casey’s (Bink editor) idea, and it made so much sense because the story does sort of happen in two parts. The first person omniscient narrator in Part Two is the central character’s twenty-one year old daughter who is basically writing (and narrating) her late mother’s memoirs in her stead, because her mother died before she herself had that chance. I was very careful to supply the narrator, Myla, with all the material she would possibly need to do that in great detail (hours of old home videos, tons of photographs, her mother’s lengthy journals, stories from relatives/friends who were present at the time). In fact, a good portion of Chapters Ten through Twelve are ‘seen’ through the lens of an old Sony Hi-8 video camera, which was being carried around by one of the characters. Old photographs come to life. Her mother’s journals are quoted and ‘left open’ for the readers to peruse for themselves. I can’t say I’d learned this technique in any formal setting, though. It just happened. I didn’t know any other way to tell that part of the story except from a first person omniscient POV. It seems I’ve pulled it off, so that’s good!

If there’s a cautionary tale to learn from, then good. Otherwise, it will at least raise awareness about issues that most people (myself included) have only known stereotypes and media caricatures.

Redemption, forgiveness and secrecy are strong themes in the book and you talk about wanting to address sensitive social issues in your work. Is that important for you as a writer to show how issues can be overcome?

I think it’s important, if you’re going to write contemporary dramatic fiction, to keep it real. Sorry for the played out expression, but I do mean that literally. If you’re going to write about, say, police brutality, then you’ve got to tell the truth, even if it’s an ugly difficult truth that some readers might resent. If you’re going to write about infidelity, then you’ve got to tell it the way it is—people get hurt, lives are turned upside down, people get nasty with each other and do very ignoble things. The story of Everything deals with the topics of death, familial dysfunction, secrecy, and with suffering the fatal consequences of making some very poor decisions. If there’s a cautionary tale to learn from, then good. Otherwise, it will at least raise awareness about issues that most people (myself included) have only known stereotypes and media caricatures.

Do you believe that literature plays a part in addressing these issues?

I think it always has. It just depends on what you choose to read, or choose not to read.

I think Myla grows a lot from having learned these things, and I hope the reader will, too. I know I learned more from doing the research for this book than I ever bargained for, so much that it inspired me to make a mid-life career change.

You have a unique way of telling the story in Everything, can you tell us a little about Myla?

Myla is a casualty in her mother’s twenty year nightmare, most of which her mother (Jolán De Carlo) has kept hidden from not only Myla but everyone she knows. Myla is telling the story as a twenty-one year old college student, starting with the first few months before her mother dies unexpectedly from a massive heart attack when Myla was only fourteen. It is a heart attack that Myla thinks she caused by wishing her mother dead during an argument the previous evening. She discovers, however, that there were causes for that attack that go back years and years, and in digging through her mother’s past, through all the old stories and memorabilia, she uncovers disturbing secrets about her mother’s college years…and one very heartbreaking secret about herself. I think Myla grows a lot from having learned these things, and I hope the reader will, too. I know I learned more from doing the research for this book than I ever bargained for, so much that it inspired me to make a mid-life career change. I’m now back in school for some specialized training in a new field, thanks to the research that went into Everything.

The Everything book trailer!!

Thanks for dropping in and chatting to me. You can find Carole here:

Below is the blurb for Everything

“I’m not you, and I never wanted to be! Don’t you get it? I don’t wanna be anything like you! I hate you, and I wish you would just drop dead!” fourteen-year-old Myla Edmunds exclaims. Then the next day her mother dies of a massive heart attack and Myla thinks she killed her.

Jolán Edmund’s friend, Rachel, tells Myla she didn’t cause her mother’s death, that there were factors for Jolán’s heart attack that went back years and years. Jolán, a well-respected violinist, had always kept a close guard on her past. Unconvinced, Myla wants to know everything and Rachel, along with friends and family, help her uncover her mother’s world of devastating secrets, all of which lead to the most startling secret of all—herself.