Above & Beyond Series * Book III 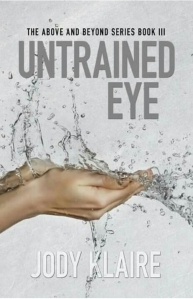 Aeron Lorelei isn’t finding it easy in the Criminal Investigations Group. After St. Jude’s, Commander Renee Black has distanced herself. Their boss, General Ursula Frei is as icy as always and Aeron’s mother, Lilia-The woman she’s stuck in CIG replacing-has settled nicely into the very same home Aeron worked so hard to get back.

Women in her eyes are officially a pain in the butt.

It doesn’t help that her heroic actions in St. Jude’s have seen her burdens removed and, although she’s happy to be rid of them, she’s not sure any of the women around her are going to be as pleased.

But then Frei comes to her for a personal favour. A favour than involves infiltrating Frei’s past and rescuing teenagers. A favour that needs Aeron to pretend she hasn’t lost her burdens…

… and one of them get left behind.

What the reviewers think…

“These are amazing characters and unusual plots. Jody Klaire manages to mix up a thriller crime drama with a psychic whodunit and an ever so slowly burning romance. It’s a wonderful action adventure story for girls. Add in humour, great dialogue, brilliant writing and these books are just a joy.”